You know how that first week of work feels after vacation? Yeah. That was this week. And to add insult to injury, we had immunization day on Tuesday, which happens twice a year and they are hands down my two most stressful days. BUT, this one went off with barely a hitch, and the good news is that both days are over for the year! 130 kids immunized. Woot Woot!

My five frugals for the week:

1) DH and I went for our annual dental cleaning/exam/x-rays. Yes, I know I should go twice a year, but it seems to be hard enough for me to get in one visit, so I am happy with that. We're still in the no cavity club ☺This is part of the dental plan at our school, so the cost OOP is ZERO. Happy to have that over for another year. Do you have a dental plan as part of your benefits? Then you have no excuse...use it!

2) I picked up two free movies and 3 partially filled bottles of perfume (one being my favorite brand) from the free table in our teacher lounge.

3) I finished our US taxes using Turbo Tax (well, 99%--awaiting one piece of info), AND I will save $20 doing so because I have a Mint.com account. Another not-so-fun-task marked off the list. Double the fun for us since we have to file in Hong Kong and the US, but the HK tax year runs April 1-March 31, so I have another couple months before the second filing is due. (For inquiring minds: the US is one of only 2 countries that requires you to pay taxes on income earned in another country even if you pay taxes in the country where you work. The good news for us is that you only have to pay on anything above $100K USD per person or $200K per married couple, and that is never going to happen while we are in HK, but we are still required to file.) I also filed our annual FBAR, another fun US government requirement if you have bank accounts outside the US. In theory, this helps them track down criminals, but honestly, if you are hiding your money in an international account to avoid paying taxes, are you really going to report it?? Seems to me it simply makes more work for us honest folks.

4) My American Express Platinum card lets you choose an airline annually and gives you $200 back per calendar year if you book any incidental fees (baggage fees, lounge access, etc)  with that airline using your card. They also let you book gift cards if you choose American Airlines. Since I want to cancel this credit card later this year, I went ahead and bought my gift cards so that I will get that $200 bonus in for sure.

5) I made hummus from scratch! First time, and I have my sister Fae to thank for inspiring me when I was home at Christmas. I LOVE this stuff, but it is quite expensive to buy it pre-made in Hong Kong. Here is the recipe I used, and it doesn't use tahini paste, which tends to be the most expensive ingredient. DELISH!


And for my readers with a US address, a few freebies for you:

Get a coupon for a free cup of Noosa yoghurt. 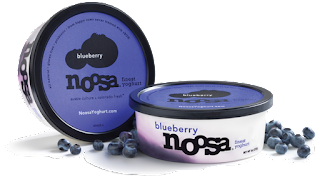 Now through February 28, get a free glazed donut with a coffee purchase at Krispy Kreme. (So jealous right now!) 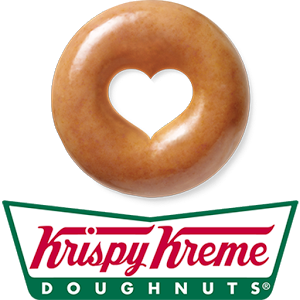 And here is a free sample of Breathe Right strips. 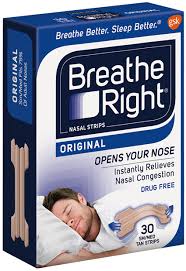 And for Hong Kong readers, there is a fun contest on facebook right now compliments of Farmer's Market. Enter here for a chance to win $1100 HKD worth of grass fed beef tenderloin. Contest ends February 13th.

Dubai Part 4: Camel Burgers, fun in the desert and 2 free nights at Park Inn by Radisson

This is Part 4 in a 4 part series about traveling/saving money in Dubai. You can read the rest here: Part 1, Part 2, Part 3.

We spent our last full day in Dubai taking the train back to downtown Dubai, visiting some more big malls and having a camel burger and some camel milk yogurt, for which I had purchased a Cobone (think Groupon).  Interesting texture, but not bad! The camel milk yogurt was actually quite good. 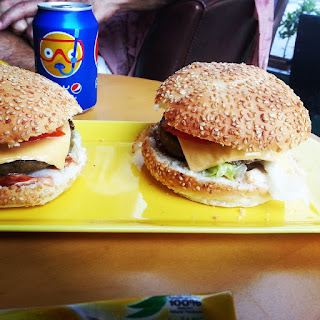 In the afternoon and evening, we went on a desert safari, which is the real reason I had wanted to go to Dubai in the first place, and we were not disappointed. There are many tour organizations out there; we chose Platinum Heritage Safari, mostly because of their great reviews on Trip Advisor, and also because I liked the fact that I would riding around the sand dunes in a genuine 1950s Landrover! So cool! 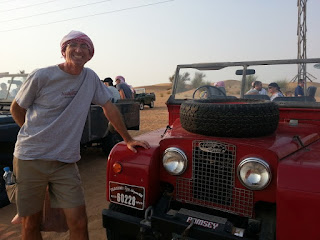 They picked us up at our hotel, gave us traditional head gear (which you get to keep), and drove us out into the desert, where we went on an hour long safari, watched a falcon show, got henna tattoos  (don't worry--they fade in a few days!), rode camels, watched traditional dancers and swordsmen, and had a meal of Arabian coffee, hot camel milk (it's salty!), camel and mutton dishes, rice and several other things I can't remember in a bedouin camp. It was as amazing as I thought it would be. The desert has a beauty all it's own. 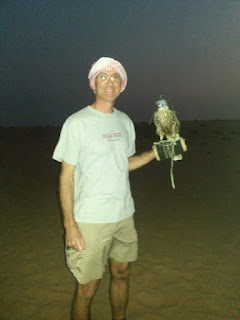 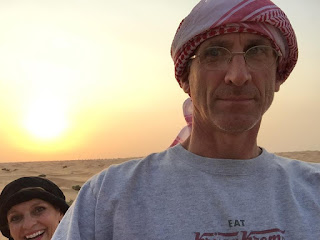 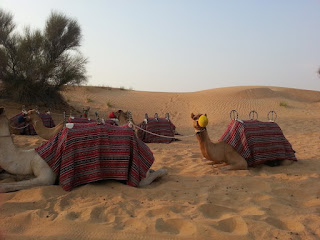 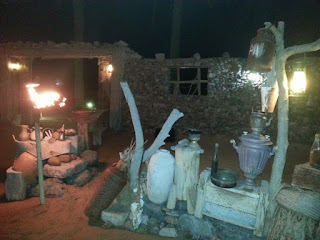 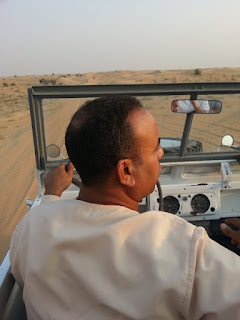 Our last two nights were free compliments of my Club Carlson Visa Card(issuer is US Bank, this is not a referral link). Club Carlson offers 4 different Visa cards, including one with no annual fee, which each come with varying levels of perks. I have their premier signature card, which gives you 85,000 points if spend $1500.00 in the first 3 months. You also get 40,000 points annually and Gold Status with Club Carlson as long as you the card. This gives you early check in/late check out and several other benefits, but the 40.000 annual points makes this card a keeper for me.

We stayed at the Park Inn by Radisson, within walking distance of the Mall of the Emirates, which boasts the largest indoor ski slope! How crazy is that? 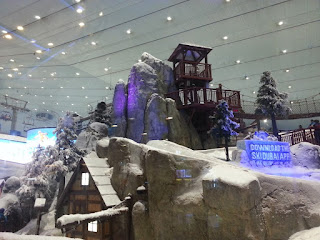 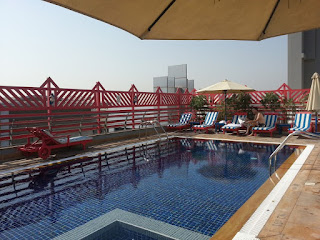 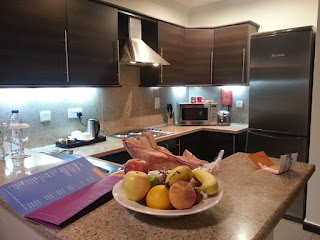 The hotel was also very close to the metro, had a nice roof top pool that we had all to ourselves, and a fully equipped kitchen. As a Club Carlson member, we had another nice fruit basket waiting for us, along with some sweet treats and bottled water. This room would have run us $420 USD for two nights, and although it was the least expensive of all our hotels, it was by no means inferior.

So, to summarize our savings in Dubai (approximated):
Free night at the Waldorf: $680
Free night at Ramada Downtown: $400
Free night at Grand Hyatt: $400
2 Free Nights at Park In by Radison: $420
Savings by using Cobones for day trips and food: $100
Savings by booking early/sale on Emirates: $200

Could you do Dubai cheaper than we did by staying in hostels? Sure thing! But this was a fun experience, and in my top 3 vacations ever.

Tell us where your dream destination is! Are you saving for it??

This week was Chinese New Year Holiday in Hong Kong, which meant that we had the week off (Reason #214 why I love working in a school!). Of course, I couldn't pass up the opportunity to travel, but I didn't want to travel far, spend much money or plan back-to-back activities, so I opted for a week at Las Flores, a Bed & Breakfast in Cebu, Philippines. We didn't plan any activities before arriving, so it has been a low key week of reading, Scrabble games, kayaking, swimming and breakfast/dinner on the veranda. Even the internet has been sporadic at best, a welcome reprieve in itself!  No matter where we go or what we are doing, we can find ways to make the most of our money. Here are 5 ways I saved this week: 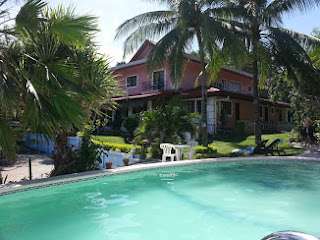 1) I had the B&B owner set up an afternoon of boating with a local fisherman. For $32 US, we had an 1.5+- boat ride up and down the coast of Cebu on the beautiful Camotes Sea. He dropped us off at our own private beach for an hour or so, where we were able to snorkel among the reefs. This was a first for me, and I now understand its allure. The live corals and colorful sea creatures are a world that many of us never see, and it's hard to put into words how captivating it is. We easily could have paid up to $200 US per person with an travel agency, and I daresay that our secluded adventure was just as good. I only wish I had a waterproof camera! The underwater picture here is from the website My Cebu. 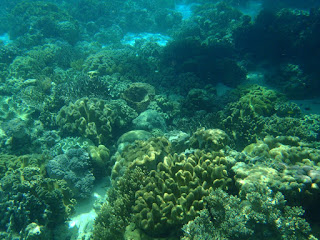 This is very similar to what we saw, but with more fish. 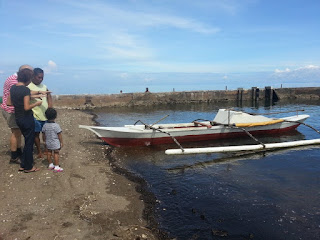 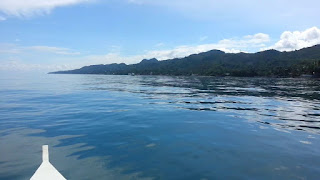 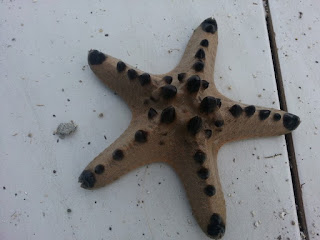 One of the creatures we saw--the Horned Sea Star, (also called Chocolate Chip Star) about 8" long.  Don't worry, we put him back. 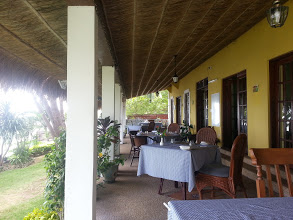 2) We ate local. Breakfast was provided, and was quite sufficient. I used American Express Travel to book, and was able to combine points with cash to only pay $35 US per night, which was a fantastic price. We stayed 7 nights, and there was only one other family and one single lady here for a couple of those nights, so it seemed like we were staying at a friend's house. There is a restaurant on site that offered us very affordable meals for dinner, and we could come down barefoot to the back porch. Our favorite was a huge Salmon steak with little baby potatoes and fresh vegetables for $9 US. The local Marlin was fabulous also. Everything I tried was delicious. We also went to a couple of local restaurants for lunch--the most we paid was $4 US for both of us, bottled soda included. We didn't look for any high end places...we didn't need to! I don't think I can cook at home in Hong Kong for the prices we paid here. 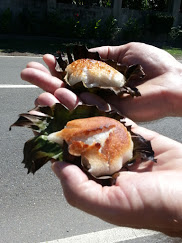 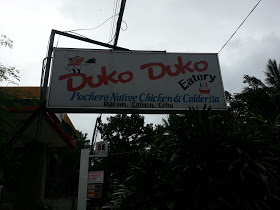 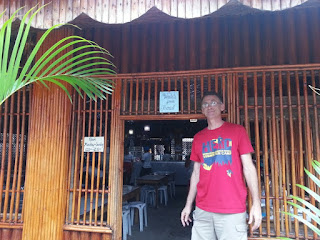 So named because you have to "Duck" your head to enter!


3) I asked the owner if there were any places in town to get a pedicure and a haircut, knowing that it would likely be cheaper than Hong Kong and I had nothing but time.  She actually arranged to have a lovely lady come here. I got a manicure, pedicure and haircut--better than any I have had in Hong Kong--for $20 USD-- while sitting on my balcony listening to the waves. I rarely get mani-pedis, in fact, this was only my 3rd pedicure ever, and getting to know this sweet local woman was priceless, and oh-so-worth-it! 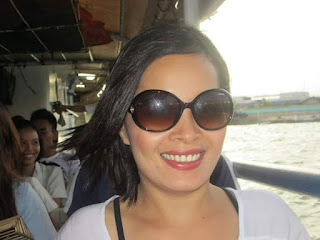 My hairstylist/manicurist. I wish she lived in Hong Kong! (She let me use this picture...thank you, Doris!)

5) I read books and magazines and played games provided by the B&B.  Better than a library! 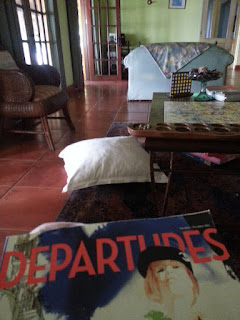 5) We ate free meals coming and going at airport lounges and on the plane. Lounge access is a favorite perk of one of our credit cards (through Priority Pass), and it's nice not having to make a meal right before/after a trip. Hong Kong has 3 different Plaza Premium Lounges, all with different hot and cold food options.  Also, Asian airlines tend to give you a hot meal even on a short flight. Our flight from Manila to Hong Kong was less than 2 hours, but we still got a meal. 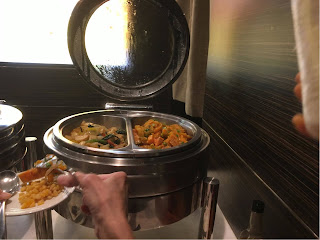 6) (Oops, one more than 5 frugals!) I only brought back these free pretties for souvenirs....the best kind! 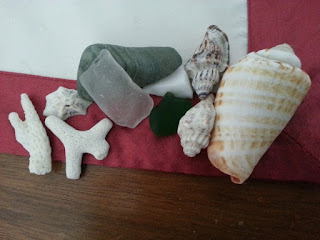 And finally here is a freebie for my US readers, a first aid kit! Just fill out the form and it's yours! Dubai part 4 is in the works...
Posted by my frugal life at 2:46 AM No comments:

Subscribe to receive posts in your inbox and to be eligible for giveaways!